“Interaction of a Mixed-use Complex Urban Habitat with City Context” 
“Eliminating the Back Door in Mixed Use Planning” 
“Suspended Ground: the Landscape Approach that Enabled One Shenzhen Bay to Redefine Luxury by Reconnecting with its Setting”

Too often, tall buildings are presented as mutually exclusive with metropolitan vitality and walkable urbanism. This has been reinforced by over-scaled, multi-building developments that are poorly integrated with the existing street grid, let alone nature. But the skillful arrangement of towers and the disintegration of the typical podium block model, combined with the use of plantings, not as mere decoration but as integral architectural elements, can humanize the tall-building development. Level changes, water features, and access to natural areas add texture and intensity to the neighborhood. Combining this with multi-dimensional programming and good access to multiple modes of transport can transform large developments from walled fortresses to cities within – and integrated with – cities.

This program visited numerous indoor and outdoor areas of One Shenzhen Bay and its surroundings, many of which are usually not opened to the public. These included: the Sky Concert Hall, Helicopter Lounge and Helipad, Hotel Sky Lobby and Private Club, the Residential Courtyard, Rooftop Garden, Tower Square, Skybridge, and Talent Park. 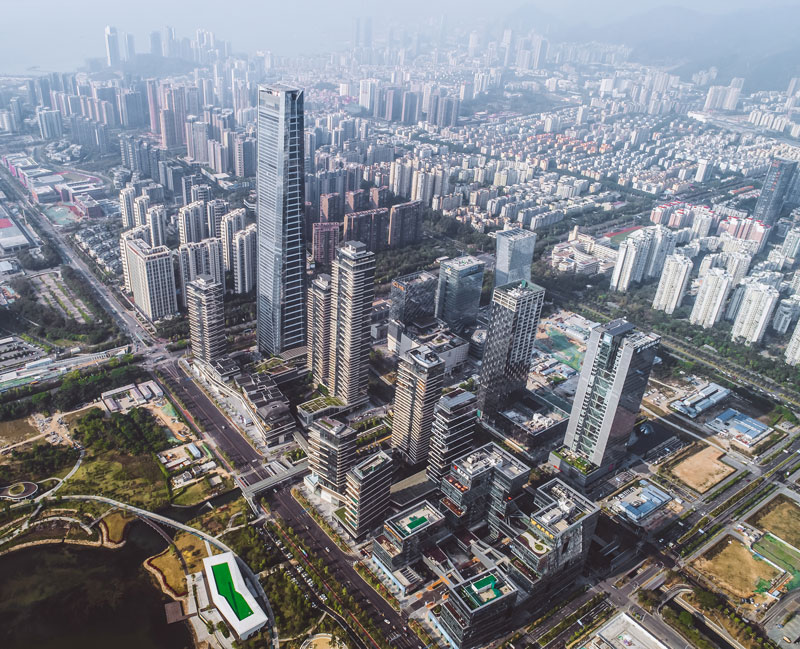 Scenes from the Off-Site Program

Use your mouse to move around the map and see other off-site program locations in this city. Click a marker to see more information.