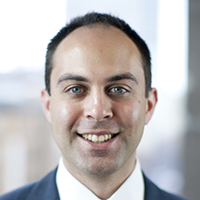 As the complexity and height of tall buildings has increased over the past half-century, façade access equipment, which is used to enable to owners of high-rises to clean and maintain their buildings, has needed to evolve along with it. The first high-rise buildings were relatively simple square buildings with simple façades, but as design technology has increased, today’s manufacturers and designers must contend with positive and negative slopes, as well as environmental facts such as strong winds near the pinnacle of supertalls and megatalls. In addition, the changes in curtain wall technology now means that glass frequently needs to be changed on the outside of buildings, as the size and weight of the glass—which can involve weights of over one ton—means it is no longer feasible to do this internally.

Architects also often require that the machines should be hidden from view so as not to alter or affect the appearance of the building. Mitigating the appearance of these generally large machines within the building’s façade or other building features adds a layer of complexity to the façade access and maintenance strategy, including timing the operation of the machines, storing them, and performing regular maintenance. When factored in against weather, climatic and slope considerations, effectively vetting and installing the appropriate system for a building can become a formidable task. Thus, it is most effective to consider the requirements and preferences of a façade access and maintenance system prior to its installation.